When you look at most of these tragedies-and so many others this summer-one thing really stand out.

“It’s like teaching your kids to say please and thank you at the age of two. When they’re 17 and 18 – you’re probably still reminding them. We need those kind of reminders consistently in terms of seat belt use as well.”

In the metro area-10 people have died in the last ten days in crashes.

Investigators say in at least four of the deaths the victims were not wearing seatbelts.

For years, Tom Everson has been waging a campaign across the country to get people to slow down and wear their seatbelt.

The Seatbelts-Fascinating Campaign was inspired by his father. 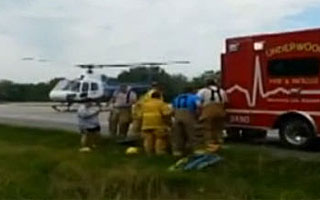 Tom Everson of Omaha says, “When he bought Ford’s 10-passenger station wagon in 1966 — he put seat-belts in it. I didn’t realize it at the time but he was a seat belt pioneer.”

At his recent “Run to Remember” at Pikes Peak-he was joined by the parents of Alexa Johnson-a Colorado teenager who was killed when she was thrown from a pickup.

“When they got together — they missed her hugs. And the seatbelt is like a hug.”

“It’s a real testimony to the family to do something positive to get them to buckle up.” said Everson.

The family’s ideas is called Alexa’s Hugs. You put a patch on the seatbelt. The idea is to keep it right over your heart to remind you of a hug from a loved one everytime you buckle up.